What began life as a small London boutique is now one of Europe's leading manufacturers of scented candles, diffusers and fragranced products for your home. 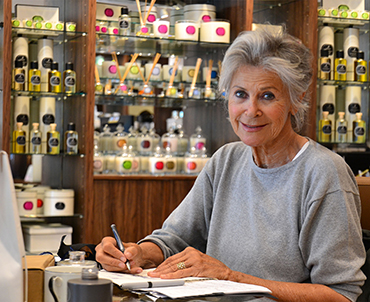 Carol Symons opened her shop nearly three decades ago with an assortment of gifts and three scented candles. Handmade, with 100% natural wax and her favourite scents (including Parks Original). It wasn’t long before established retailers like Thomas Goode, Harrods and Nina Campbell spotted the attention to detail, classic design and unique fragrances - they began placing orders.

These weren't just the earliest days of fine-fragranced candles for the home, it was also a time when Greenpeace and the environmental movement were yet to be taken seriously. Carol’s commitment to 100% natural wax combined with the highest quality candle was beyond the capabilities of existing producers. They hadn’t come to terms with producing eco-friendly products from sustainable sources and were still wedded to using paraffin - a much easier material to work with.

It quickly became obvious there was no way to meet the ever-increasing demand and maintain quality. Carol's husband, Sidney (not ready for the retirement he’d just taken) was drafted in to help. Parks invested heavily, becoming one of England first 100% natural scented candle manufacturers capable of delivering serious volume to the highest specification - Carols values. Those values have driven a continual investment in R&D, staff and infrastructure. Proprietary processes such as CleanBurn Technology were developed in-house our own laboratory, only the finest precision equipment is commissioned from around the world by Duncan (ex-British military - no less), our Head of Engineering.

Today, Parks is still a family run business, making its range of candles and diffusers from a 33,000sqft facility in the heart of England, with its showroom in London’s West End and has customers on all five continents - but we've never forgotten the values which brought us here.